The route leads you through marvelous cities and one of the most spectacular landscapes of Germany. 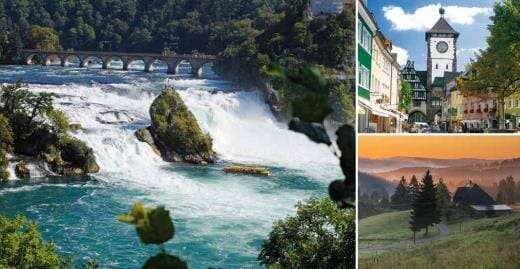 Start
Starting at Heidelberg one of Europe´s most beautiful cities the tour goes on to Baden-Baden where chic & glamorous hotels, shops, thermal baths and a casino await you.

Stop 1
Your next stop is the city of Strasbourg in France, acknowledged as a UNESCO world heritage site.

Stop 2
On the way to the Black forest Highlands Freiburg is worth a visit. It is known for its sunshine, fine wines and its historic town center.

Stop 3
Through the Höllental (the hell valley) the home of the Cuckoo Clock and Black Forest Gâteau welcomes you with a picturesque Black Forest landscape as well as a rich cultural heritage.

Stop 4
On your way to Lake Constance you take a detour to Schaffhausen in Switzerland to visit Europe´s largest waterfall.

Stop 5
At Lake Constance you make a tour on the Flower Island Mainau and see the medieval town of Meersburg.